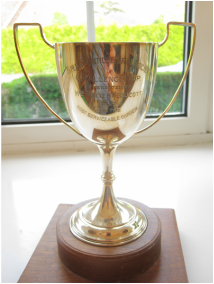 The Speen Horticultural Society Challenge Cup was presented by Mrs Walter Medlicott in 1928 for 'The Most Serviceable Garden'.  It has been awarded every year since (with a break during WWII) to the allotment which is deemed by independent judges to be the best on site.  Judging takes place in July usually and each allotment is scored . This is based on the variety of produce, quality of produce, general condition & condition of edges.
In growing season 2013 it was awarded to Mrs Margaret Gould of Speen at the annual AGM in March.  It comes with a £15 prize gardening token.